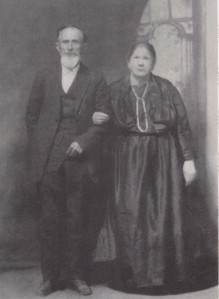 John was enumerated in the 1870 Census in his father’s home in Pulaski County, Georgia at the age of 13. His occupation was listed as “works at Steam Mill.” Undoubtedly, either his father or his Uncle William Attaway had helped him get work there. His mother had died in 1866 and he did not get along with his step-mother. Sometime after August of 1870, he left home with his father’s blessing. 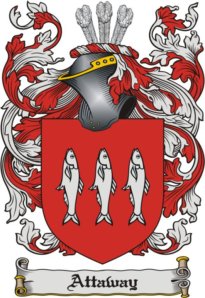 “John never accepted his step-mother….so at the age of 12, a neighbor family, by the name of Featherston was moving to Texas, and persuaded John’s father to let him come along with them, so he made his home with them for several years (maybe ten). Then he got a job at White Rock Texas working for a man named Tom Collins, and that is where he met a young lady named Matilda Viriginia Northcutt. He courted her for about two years and on September 30, 1880 they were married at White Rock, Texas near Waco.”

John appeared in the 1880 Mclennon County Texas census in household #77 as a border in the Collins household age 23. Household #89 held his fiance. The 1890 census records were destroyed in a fire, which is a real tragedy because it was the only year that an entire page was used for each person.

In 1889, he moved his family to Suez, Comanche County, TX. They remained there until after the turn of the century. According to Leeama Attaway Ewing they moved to McCulloch County, TX on December 5, 1901, in what was to become Calf Creek, Texas .

According to David Deland, great-great-grandson of Edward Deland:

“The first site was two miles South of the present location and named Deland in honor of the original settler, Edward Elijah Deland. Mr. Deland was a farmer. His daughter Minnie was the first school teacher and taught in a one room schoolhouse which was a quarter mile north of the creek in the Deland pasture. Ira Deland, (son of Edward), was the first mail carrier. In 1898 the Calf Creek school had one teacher and twenty-three students. Baptist and Methodist churches were organized in 1903. 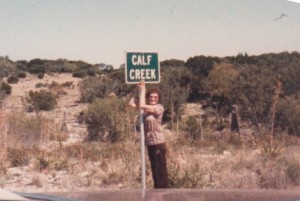 In 1903 the Melton Land Company put on a land site boom, selling off the Huey ranch by cutting it up into farms. This brought the Attaways, Kolbs, Whitleys, Hains, Tuckers, Stapps, Karneses and Crouches. In 1904 the Bridges, Hodges, Hazeltons, Whiteheads, Childresses, Devours and Gainers moved to the community.

In 1903 the J. W. Attaways organized the Baptist Church and named it the Lone Star Baptist Church. About the same time, the Methodist Church was organized with J. A. Whitley as the first pastor. The first Sunday School was organized by John L. Jones. Union literature was used with all churches banded together. this arrangement was used until 1940. Each summer, usually beginning the Friday before the first Sunday in August, a camp meeting was held on Calf Creek in the Deland place.

Edward Elijah Deland died November 12, 1903 and was buried in the Calf Creek Cemetery. His wife, Narcis Jane, died in 1929 and was also buried at Calf Creek.

The Deland post office operated from 1906 to 1909. The focus of the community shifted about a mile to the north, and the new post office, called Tucker in honor of local store owner Lum Tucker, operated from 1909 to 1915. Tucker had a cotton gin, a general store, a blacksmith, and a grocer in 1914. The community moved a mile north to its present location, and the post office changed its name to Calf Creek in 1915. The name “Calf Creek” comes from a nearby stream which itself was reportedly named because early ranchers had built cattle pens along the creek. The post office was discontinued in 1953. Mrs. Artie Russell was the first postmaster. She also had a dry goods and millinery store.

In 1905 the Alexander’s built the first cotton gin and at one time Calf Creek had two operating cotton gins and they still could not keep up. The overflow had to be sent to nearby Brady, Texas. The Alexander’s also gave land for the schoolhouse and cemetery which were both just off present day Farm Road 1311 and behind two other structures which I assume were the Post Office and general store. The new school, (actually a combination school / church / community center) was built in 1921 from a $8000 bond project and at times enrolled as many as 100 students. The community’s population gradually declined, however, and the school district was consolidated with the Brady schools in 1949.

In 1914 telephones came to the community and for a while everyone had one for 75 cents a month. Mrs. W. W. Kolb operated the switchboard in her home..

Calf Creek had fifty residents and two businesses in 1949. Just a ghost town consisting of the school house and cemetery today. ”

James Bowie and ten others fought more than 150 Caddo and Lipan Indians along Calf Creek on November 21, 1831.  A historical marker remains there in McCulloch County, Texas today. A letter about that battle written by Jim Bowie and published in J. C. F. Kyger’s “Texas Gems”,. ISO-154 can be found on this page.

According to Leeama Attaway Ewing: 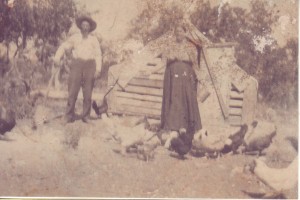 “They sold their home in Comanche County and came here and bought land with nothing on it, went to work grubbing trees to clear the land and build a fence. They pitched three big tens and the family of ten lived in those three tents for eleven months. To build a house, they had to haul lumber from Brownwood because Brady did not have a lumber yard. But the good neighbors helped them haul the lumber and some of the men helped build the house so the family would be in by winter. So they moved in Nov. 1902. The John Attaway family were baptists and at that time there was no Baptist church in Calf Creek. It was too far to go into Brady, so in the early part of 1902 , they (John Attaway) organized the first Baptist church and called it the Lone Star Baptist Church. For the rest of his life, which was about 25 years, he served as a deacon in the church and helped all the other denominations in their church work. ….John never talked very much about his home life. He said his mother was a very small, full-blooded French woman and his father was a big sandy-haired Irishman, came to the U.S. as a very young man.” 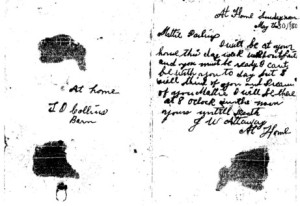 A note that John wrote to Mattie was written in 1880 before they were married. It says:

“At home
T.O. Collins bar
At Home Sunday morn
May the 30th 1880
Mattie Darling,
I will be at your house this day week without fail and you must be ready. I cant be with you today but I will think of you and dream of you Mattie. I will be there at 8 oclock in the morn.

Yours until death
J W Attaway
At home”

“The two ladies were typical pioneer women. They helped to bring children into the world and helped them to grow up to be good men and women.

I remember that during World War II boys writing home to ask Granny Attaway to pray for them.”

Their oldest daughter, Maude Bell Attaway Hansard died in childbirth in 1910; and they took the youngest girl, Opal May Hansard in to raise as their own. After John died of a heart attack in 1927, Matilda lived with Opal until she was married in 1932.

According to Leeama Attaway Ewing:

“She passed away on Feb 12, 1954 at the home of her daughter and son-in-law, The Ewings, on a Fri night at 1:15 p.m. There were two friends, 4 daughters, a son-in-law, and the family Dr. Anderson. The four daughters were Manerva McCoy, Dollie Kiser, Ethal Wren and Leeama Ewing. The son-in-law was John W. Ewing. ”

After Robert Madison Attaway, their other son, died in 1919, John and Matilda were left with 6 married daughters. Leeama wrote: “Matilda and John had 10 children – 1 son and 8 daughters, and the granddaughter. John always said the devil owed him a debt, and paid it in son-in-laws, he always made a joke of that.”

Children of JOHN WILLIAM ATTAWAY and MATILDA VIRGINIA NORTHCUTT are: